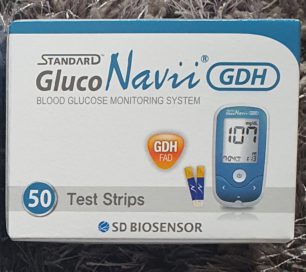 -Accuracy in accordance with international standards

GDH-FAD TEST STRIPS FOR GLUCOSE TESTING
The test strip analysis is based on the GDH-FAD, which is specific to β-D-glucose (a primary source of energy for living organisms) with the biosensor technology used.

Coenzyme Specificity
The strips have the capacity to measure most blood samples, from capillary to artery. Also, the GDH-FAD strip can prevent maltose and galactose interference in blood samples. Because of this features, one gets accurate results within the shortest time possible.

We are a Kenyan-owned online Pharmacy and Diabetes Care Center built from a patient-perspective. We are a licensed Online Pharmacy operating from Nairobi and delivering medical supplies countrywide.